So, you've angered our digital overlords.

What would you do if you digital identity was taken from you? 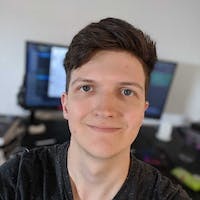 These days, we are all too reliant on technology, I’ll be the first to admit. I don’t have a huge issue with it, because it makes my life much more convenient, enjoyable, and it usually works. Usually. 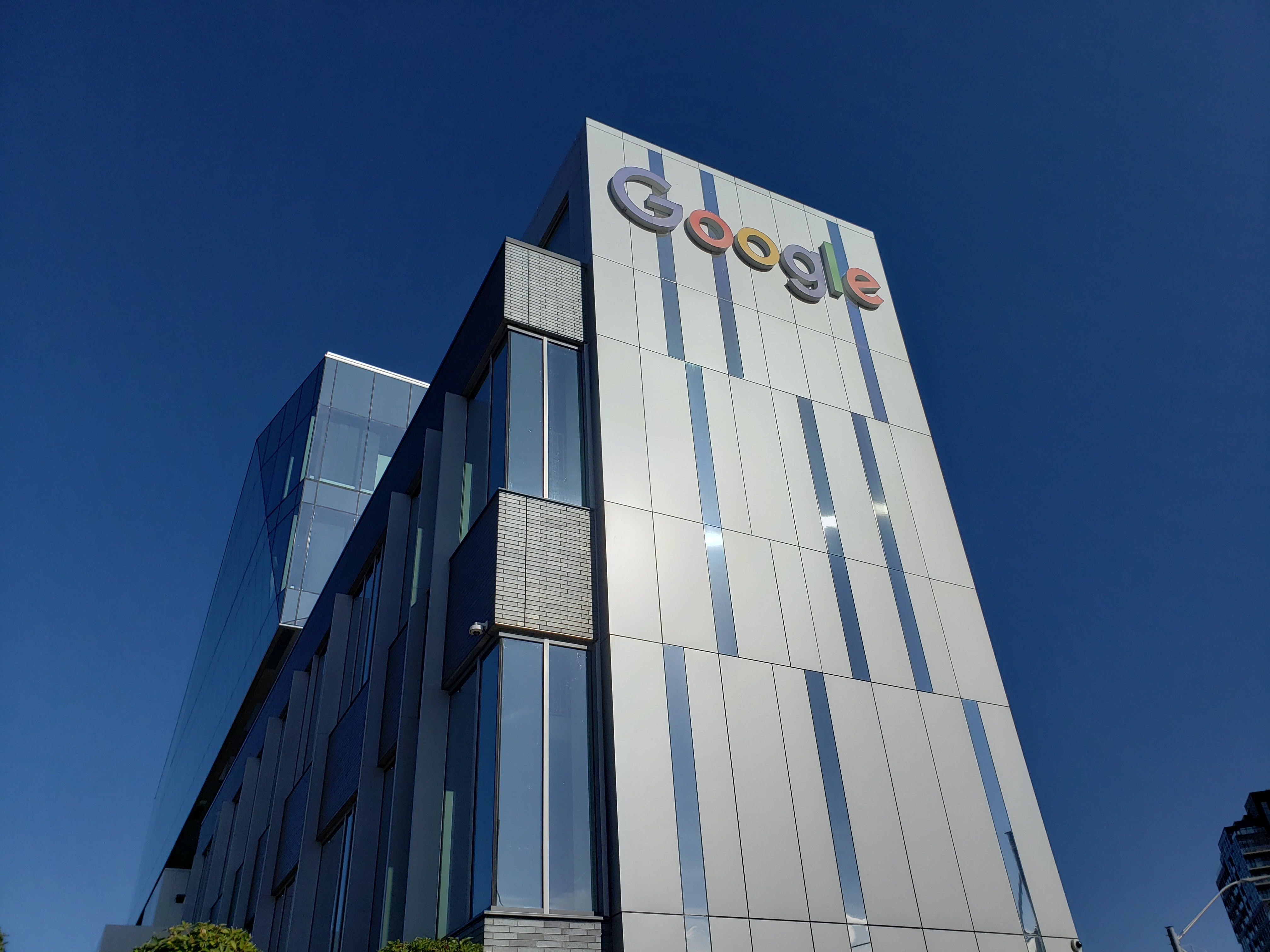 I am a heavy user of the Google ecosystem. From Pixel phones and Chromebooks to Google Home and of course, Gmail — the search giant pervades every aspect of my life, and I’ve never really had an issue with that in the past.

People always mention how google is selling our data, etc, and when you see stuff like your google maps timeline, it sends a chill down your spine, but I’ve always thought “well, they’re probably being more productive with that data than I am” and that was that.

Well the other day, I stumbled across this tweet: 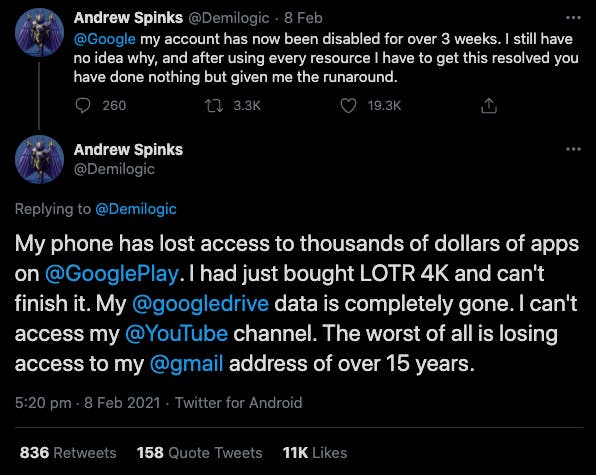 This struck some fear into my heart for sure. I rely so heavily on the google ecosystem, I started to think about what would happen if I somehow lost access to my primary google account.

For a start, that would be my Gmail and google drive gone, where I keep record of countless important documents and conversations.

The next thing to worry me was the number of sites where I “Sign in with Google”. It’s a lot, 47 different services, according to my Google account settings.

The gears started turning and the more I thought about it, the more terrifying it became.

I needed a backup plan. Literally.

My foremost concern was safeguarding the plethora of important documents I store on my google drive. Probably not the smartest idea to store things like that on the cloud and hope for the best, but the convenience sure is nice.

After some brief searches, I decided the fastest solution I could get in place would be to set up a Synology NAS, and use the included Cloud Backup Package to slurp all the data from my various cloud storage providers. I’ve been meaning to set-up a backup system for my home computers for a while, so now was as good a time as any I guess, and the NAS could help with that too. I picked up a Synology DS118 Disk Station from Amazon, along with a 4TB Seagate Iron Wolf NAS Drive.

Set-up was easy enough, and by the end of the day, I had a full copy of all my google drive data sitting on the shelf in my bedroom, continuously checking for new changes. Neat.

Granted, I could have set up something DIY for a fair bit cheaper, but sometimes you just want a no-fuss solution, and are happy to pay for it. Besides, the DS118 is on the cheaper end of Synology’s offerings.

The next thing on my digital-doomsday prepper list was email. I use my Gmail for everything, personal, business, pretty much every account I have online. This one was going to be a lot harder.

The main thing is that I need to preserve any emails and attachments I already have retro-actively and any new ones in the future. Call me a data hoarder, but you never know when you need an obscure attachment from a 5-year-old email. It’s happened.

Aside from backing up my existing and future emails, I wanted a relatively clean email address which I could use if something terrible happened and I could no longer rely on Google. To this end I signed up to Proton Mail, an email provider who prides themselves on privacy and security, and who — and this is very important — doesn’t also control every other aspect of my digital identity.

My plan for tackling email at this point is a two-pronged approach. The Synology NAS has a wide array of packages for hoovering various different data sources, and when there isn’t a package, you can just SSH in and do it yourself.

I found this good tutorial on setting up Gmvault on the NAS to snag copies of all my existing emails. This is only about 7GB for me, so nothing too drastic. This task can run on a schedule to make sure the backup is always up to date. Meanwhile, if we want to start populating our secondary email provider (Proton mail in my case) with emails going forward, we can also set up a filter to forward all incoming mail to our new address. This means from this point forward, all those messages will be safe and sound on the NAS, and in Proton Mail. Nice.

This one is also pretty scary. Now, I haven’t had my Google account suspended before, but I imagine if the above tweet is anything to go by, a lot of stuff stops working. It stands to reason that your ability to “Sign in with google” could also be taken away. That’s a problem, I use that a lot.

According to the Oauth Authorisations in my google account, I have 47 apps which I sign into with google. If I lost access to all of these apps, it would not be a good day, especially notion.so, where I keep all of my online notes and thoughts organised (and where I drafted this article).

Most of these apps will allow you to add additional sign-in methods (like other social sign-ins) or — better yet — a password. I spent a good portion of my weekend going through, adding alternative sign-in methods to as many of these services as I could, and closing down any which I no longer needed or used.

Finding an alternative social login is difficult. I wouldn’t want to become beholden to any of the big tech companies, and the only options which you can consistently use pretty ubiquitously are Facebook and Google.

In the end, I’ll keep using google social login for the foreseeable future, but in the event that something should go wrong, at least I should still be able to sign in with my passwords.

For now, nothing else is of much concern. If everything was gone tomorrow, I don’t own enough paid apps or movies with google that I would be particularly devastated if I lost access to them.

De-googling is a fairly common practice among more privacy-centric tech folk. it’s never been a really big concern of mine thus far. I always thought that the convenience of the services outweighed the price you pay for them (your data and privacy). While researching information for this article, I got thinking about the common solutions people take to avoid the all-seeing-eye of the search giant, and I decided to install Firefox, set DuckDuckGo as my default search engine, and see what life is like away from the watchful guidance of our search engine overlord.

Turns out, it’s quite fine so far. I knew Firefox was no slouch, but DuckDuckGo has been nothing short of impressive when it comes to meaningful search results.

I think It is important to always plan for the worst, and hope for the best. Having contingencies in place is important so that if you lose a key piece of your online identity, you won’t be dead in the water.

There are still some bits I need to solve, like my google photos, and my google home stuff, but overall, with not very much work at all, I am now in a much better position, and feel more comfortable with the state of my digital identity.

I have no plans to stop using the google ecosystem as of now, but if push comes to shove, I will survive. 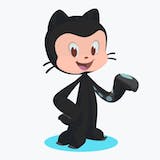 Very well put, Cameron Pavey. Thank you for writing this. 🙌